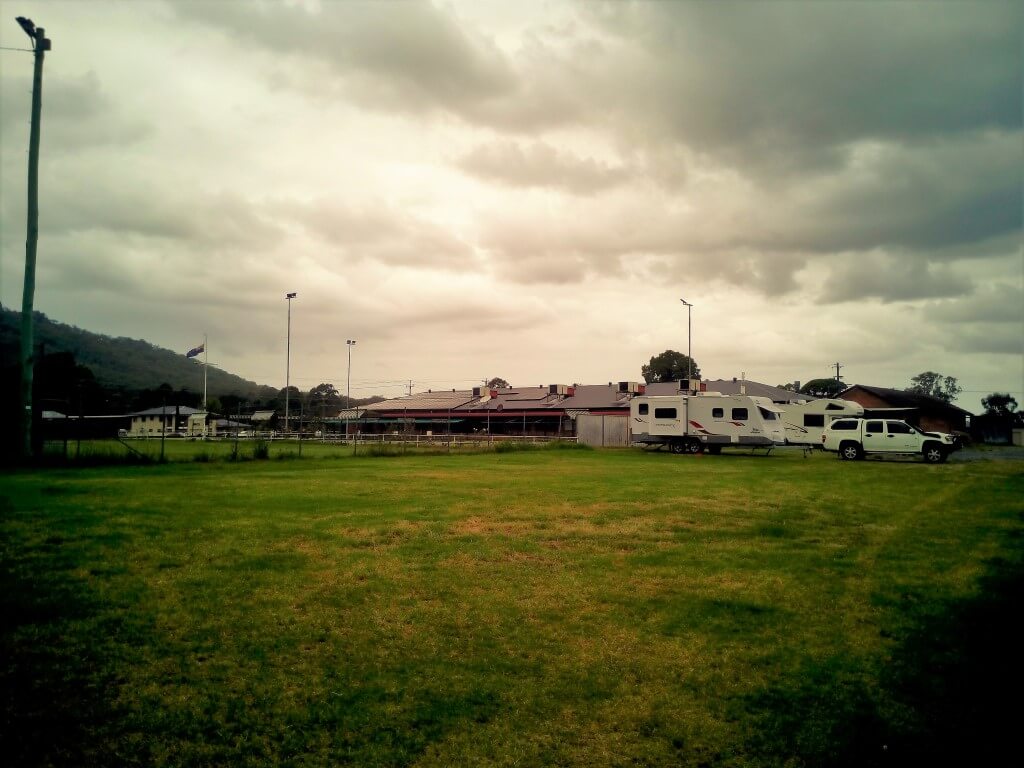 Our initial plan was to drive about 30 minutes form Nabiac to the Bulahdelah Golf Club. We drove in (not far off the highway) and drove out again. It seemed small and we didn’t get initial “this looks good” kind of feeling. It was free but I had seen a couple more places on WikiCamps, so we headed to the Bulahdelah Bowling Club.

Bulahdelah Bowling Club was a different kettle of fish. I went inside the club and was greeted warmly by a lady who showed me who to talk to about camping. We had a choice of 6 parking spaces if we wanted power. We chose power as it had been a cloudy few days for our solar and it was cheap.

We decided on 2 nights and paid the $20 then paid another $5 for another night we liked it so much.

We had a meal and a couple of beers on the first night and noticed a few other campers who had pulled up that day do the same. This is a great move on the Bowling Clubs part I have to say, a win win.

The 2nd and 3rd night we cooked at home but bought a take away bottle of wine each night. For about $16 for a bottle of Sav Blanc and $10 for a bottle of Chardonnay so wasn’t too bad.
You can watching the bowling from the covered BBQ area by the van’s, which you can sit at but not use. A brand new toilet and shower is by the BBQ area, as is a sink for doing your dishes if needed.

We went for a drive to find the dump point. We followed the map on WikiCamps which took us around the block and to the back of the showgrounds. Turns out it’s on the same grounds as the Bowling Club, handy! We drove through and back to our van.
After going for a drive we found the Lions Donation Camp by the river. It was busy and right on the river, walking distance to pub and shops. If we had spotted this one first we probably would have stayed as this was also 72hrs.
A public swimming pool is near, one of the other campers recommended it . The complex isn’t unsupervised. It has a nominal entry fee into the pool which payments go in a honesty box.
I would definitely recommended a stop at the bowling club if your passing Bulahdelah.

If you like staying at showground, sports and recreation grounds, we have stayed at quite a few. You can read them all in one place here