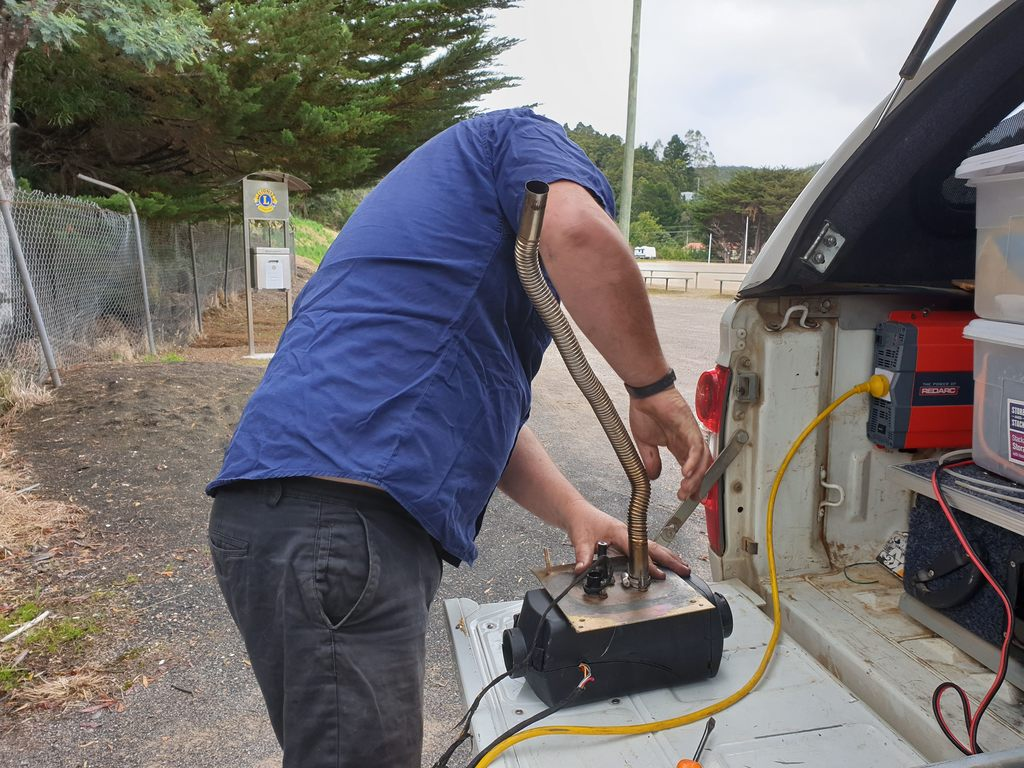 We were in Brady’s lake Tasmania soaking up the sun with over 34C temperatures. This was in the start of February 2020. The following day we went to camp at the Derwent Bridge hotel, which was from memory about 32 odd km away. The temperatures got down to 1 degree at night and sleet during the day. BIG difference.

Never Fear The Diesel Heater Is Near

The first night it rained all day and got down to 2C. So we turned on the diesel heater and run it for several hours no problem. The second day as I say it was sleet and 1 degree at night so before getting out of bed that morning I asked SNIPS ( our offline voice assistant I made… post coming on this one day ) to turn the heater on. Again working great for several hours until Sue noticed diesel smoke starting to fill up the inside of our van.

A quick trip outside in the cold and I could see smoke was pouring out of the exhaust. So no heater for the rest of the day/night. On the upside this then lead us to being Ummmm, forced to stand around the fire at the pub all night and drink beer 🙂 ( oh the sacrifices we have to do )

This also happened to us a couple of years ago but that was due to bad diesel that had been sitting in the tank un-used for over a year. So first step was to drain and put fresh fuel in just in case we got a dose of rain that day in the fuel. Unfortunately that didn’t help. However working through the system I did find many faults.

2. Inlet and outlet pipes of the fuel pump restricted. Poked a drill down the pipes to break away the orange coating that was restricting the flow. Blew it out and all’s good now as far as fuel flow goes.

3. Sadly still had a large volume of smoke from the exhaust and very little heat.

4. Removed the muffler and a heap of carbon fell out. *Yayy* discovered the main problem. A blocked exhaust which was restricting the exhaust gases causing breathing issues and a back pressure in the heater and therefore smoke to find another exit …. into our van.

5. Filled the muffler up with a few decent sprays of brake cleaner and set it a light. This burnt off all the junk causing the blockage and allowed the muffler to do its job again.

6. The exhaust pipe from the heater body to muffler however was also filled with carbon. So that meant one thing to me… the heater chamber will also be blocked. Again, time for another deep sigh.

7. Removed the heater from the van and stripped it down until I got access to where all the action is. It was filled with a heap of carbon so next job was to clean that out.

The diesel heaters themselves are actually not that hard to pull apart once out of the van. You slip the fan off, unscrew the electronic module then undo a few allen keys to remove the burner and TA DA, it’s all apart. I cleaned it manually IE: without assistance from aerosols etc. It was messy but preferred to do it that way so there wasn’t any fumes that would go boom once back in the van.

Overall removing the heater, dismantling and re assembling took about 3 hours and we now have a good working heater which we haven’t had to use since, *rolls eyes*. An added bonus now though is, the heat doesn’t have to try and penetrate through layers of carbon so the heater is nice and hot again now 🙂

Our Unit is a Chinese brand and works well when it’s going. The manual state’s checking connections and similar but nothing about periodic internal maintenance. I’ve read some of the German brands etc do. About every 500 hours I think from memory ?. I can see there’s contributing factors to ours blocking up

Some people have been known to run the heater on kero once and a while to help clean out the system. Kero runs hotter and cleaner than diesel which will also help.

If available, I’m going to buy a spare 12v glow plug ( they call it a ignitor in the manual) for my own stock as I can see one day that is probably the first thing to actually fail mechanically/electrically on the diesel heater we have. Doubt they are very expensive so probably handy to have on board as a spare. The above photo shows the glow plug if you zoom in to the middle of the picture. There’s only a small hole that exposes the glow plug to the burner tube. We got our 2kw diesel heater from Pinnacle Wholesalers.

Running a 80/20 mix of diesel and kero sounds like a good plan that we might look into in the future. One of our FB followers also mentioned they use this Decarboniser product.

Caravan RV Camping have a variety of heaters to choose from. Use our exclusive code and Save $30 when you spend over $500. Use the code “FULLTIME“ at the checkout to receive your discount!