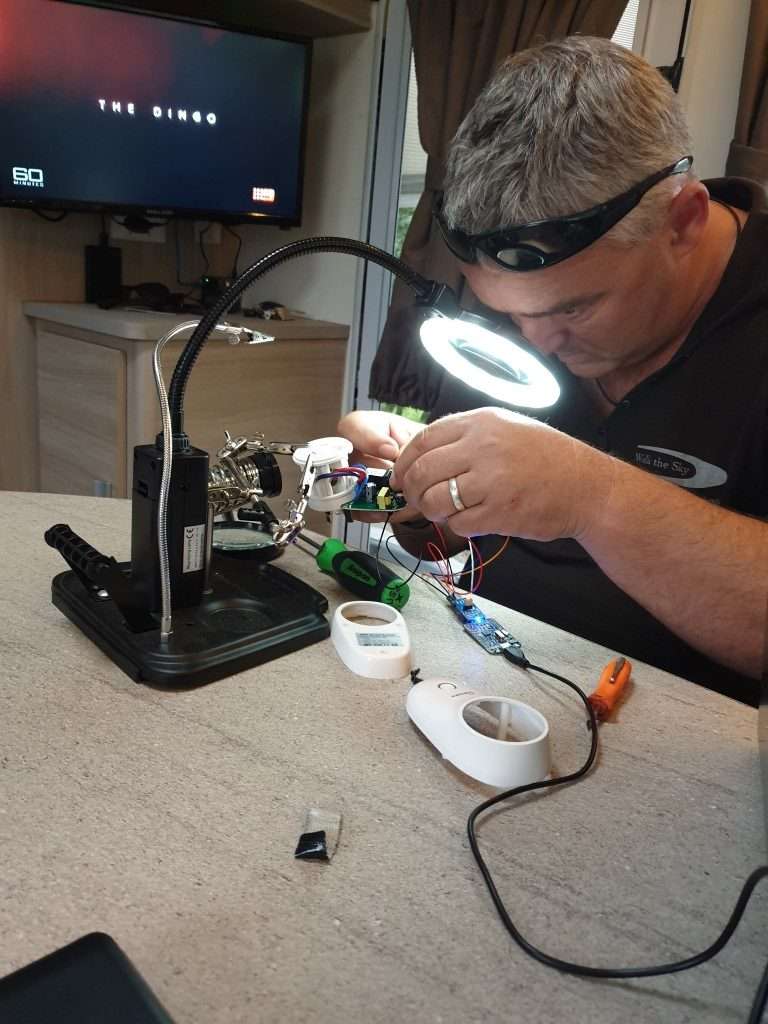 Some people play golf in their spare time, some like to fish, watch rugby or read a book. For me I go through phases where I want to learn all sorts of new things. However one phase that always keeps coming back, is my overwhelming urge to play with gadgets and smart techie stuff. In this case it’s making our caravan, a smart caravan / RV.

Now, in my mind I’m not a guru by no means but I do like to work out how things work. This could be due to being a mechanic for most of my life?. When I was younger I taught myself how to build and program a three wheeled robot with sonar sensors on it. This robot could drive around the lounge without hitting anything. Since then i’ve always been interested in the notion of bringing the digital age into real life.

I recall thinking 16 or so years ago, what if the toilet knew it was me entering the bathroom ? It could then automatically put the toilet seat up for me and back down again once I was finished. I never acted on it because, well, it was just basically being lazy but… now that we are in the digital age It got me re thinking.

If we had a house I would still love to automate it. I’d have this and that and things and stuff doing random geeky things.

That’s when it dawned on me, “We own a house” all-beit on wheels it’s still our house why don’t I make that a smart caravan / RV ?.

What automation have we done so far ?

Rather than jumping in head first and drowning I’ve made a start on automating the RV / Caravan lights. Both Sue and I have always disliked the fact that the LED lights in the van are so bright and cold feeling, so that was a good place to start. As far as lights go :

In the end what we have now is phase one of the light automation project well under way. We can control all of our lights using either voice commands, Using our phones, or by using Wall switches. We can also do it from anywhere in the world.

When operating the lights we can do it via keywords like telling google “Hey google , Good night” and google will turn off all the caravan lights, turn off the TV and AC (if on) and then play sleep sounds to us for an hour. Or we can simply say turn on/off kitchen lights etc.

What we can also do is change the colour of any of our lights from a warm white to a bright red or anything in between depending on our mood. We can also make them dim or become brighter depending on our needs. That last feature I’d have to say is gold in regards to the outside lights.

Our Awning light which sits in the tube of the carefree awning got replaced with a warm white LED strip. It then got fitted with a WIFI controller as well. We can now set the brightness to around %7. Generally speaking, we get alot less bugs at night now. This definitely helps when sitting outside and not have bugs dropping in our drinks like they used to. 7% brightness is still enough to not sit in the dark. So for that reason on it’s own it’s been a worth while project.

Phase two of the lights are now a work in progress. This phase has involved giving myself a crash course on flashing different firmware on the electronics that control our lights. It also meant a crash course on linux computer commands and understanding the Home assistant program. However, on the upside I now have the lights working more “automated” rather than just voice command etc.

With the new firmware and other geeky phase two bits well under way here is what our lights do now :

The next post coming soon will be more of a “how to ” guide for those that want a bit more of a in depth overview of adding what i’m calling “phase one” of smart lighting.

Other Smart caravan features done so far are:

All of the above will be progressively touched on in future posts for those interested in making your home on wheels a Smart Caravan / RV.

These are things I like to do when I have too much spare time 🙂 Having lithium batteries allows me to not stress too much about the extra power consumption ( which is minor anyway) and if your thinking to yourself .. why bother when you can lean forward and turn the light on ?